Good Range Days for Rol_P and his Tikka T3

I am posting this since Rol_P can't log on to the forum now.

Roland (Rol_P) bought a Tikka T3 (blued with walnut stock) chambered in 30-06 a couple of years ago and hadn't had a chance to do much load development with it. When I heard he was coming out to my area to visit family and friends I suggested that he bring his reloading tools, components, and rifle and we could try to work up some loads during his visit. So that is what we did.

On Monday we did a lot of preliminary work such as setting up dies to push the shoulder back 0.001", inventoried and sorted components, weighted cases, measured the overflow case capacity of his cases, measured bullet lengths, measured base to ogive dimensions for various bullets and calibrated the Ba factor for the lot of powder (H4350) that he had. Then we set out to find a load with H4350 and 180 gr. Ballistic Tip bullets. Below is the result. All shooting was done by Roland at a measured 100 yards. 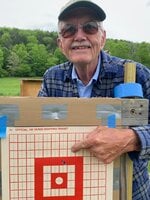 This is a 0.400" three shot group running an average velocity of 2758 fps. The velocities were extremely consistent. This load proved out in the next group with a slightly longer bullet jump and the next day (Tuesday) with an identical load. After that we shot some 180 gr. partitions to generate some once fired brass.

Based on our results from Monday, on Tuesday we adjusted the bullet jumps with the 180 partitions and tried again. Below is the result: 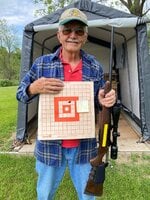 This is a 0.601" five shot group. I don't remember the exact average velocity but it was comparable to velocities with the 180 gr. BT bullets. Also very consistent.

Rol is looking good. Glad you had the time to work up some loads with him. That is some fine shooting. Those Tikkas can deliver the goods, and with the right finger on the trigger, magic happens.

Really great shooting. Just making clear in my mind, the 0.4 group was BT and the .601 with PT?

Outstanding Rol and Dan. Excellent shooting with a great load.

flyingagg said:
Really great shooting. Just making clear in my mind, the 0.4 group was BT and the .601 with PT?
Click to expand...

Either will work quite well on about any game you'd wish to hunt in NA.
B

I would say someone had a good day

Good work at the loading bench and the shooting bench. I've been shooting my 30-06 a fair bit lately, and I'm getting "good" groups, but not like that!

Hard to beat a Tikka rifle great shooting fellors ..What powder was you using ?
N

Dan,
Great job on the loading bench. Congratulations to you and Rol. He did a great job behind the rifle. The MT elk are in trouble this fall.

Nice shooting. I wouldn't be a bit leery about using that 180 BT on any bull elk at those sorta speeds.
T

That is the one of the best 5 shot group with Partitions that I have seen. Very nice shooting.

Excellent shooting!
You must log in or register to reply here.