Shooting off of the NEO-X Prototype

Several weeks ago I was able to give a test run of a prototype front rest, called the NEO-X. It is replacing the NEO rest which has been around for about 14 years. I asked Dan to do the set-up on all three guns, as I wanted his opinion, as he has used the NEO and the MINI-X rests in the past.
Dan and I drew the same conclusion...It is the smoothest and easiest rest to use and set-up that we have ever used. I haven't saved any of the videos yet to YouTube, but all three of these track beautifully in the NEO-X.
I sent it off later that day, but I am already looking forward to getting the production version. I have not fully made up my mind on colors yet-Yes there are anodized colors to choose from as well.
The three guns used.
My F-Open rifle, chambered in 284 Winchester...Yes, I own rifles. It weighs just under 22 pounds. 180 Berger Hybrids.
My 6mm Long Dasher lightweight bench pistol, chambered in 6mm-6.5x47 Lapua Improved. It weighs just under 7.5 pounds, with the scope. 105 Berger Hybrids
My heavy benchrest pistol, chambered in 7mm-300 PRC. It weighs just under 16 pounds. 190 Berger Hybrids.
Both of the bench pistols have a 6" wide forend.
I hope it is okay to show-off some eye-candy. 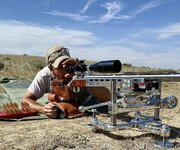 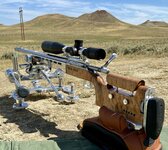 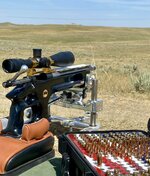 Heavy Pistol: With it's old Krieger barrel in 7mm WSM and 180 grain JLK's, and good conditions, I shot a 5-shot sub 4" group at 1000 yard match. This one obviously has more horsepower. 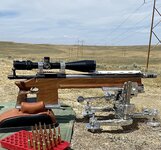 Sebastian Lambang (on the right) who is the maker of the NEO-X won 1st place in F-Open in the QRA Queens last week. SEB used Jason Mayers 7mm RSAUM, 180gr Berger, Barnard action, McMillan stock, Nightforce scope, and a Bartlein barrel. Jason is on the Australian F-TR team. 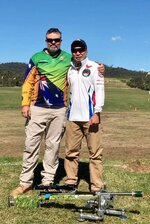 Thanks!
Yes, I know I am extremely spoiled

Very impressive, Ernie. I believe I would find your suggestion a darker, perhaps a more muted presentation preferable. 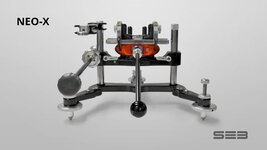 I think I'd prefer one that is anodized . I like that bright shiny bling look , but the sun glare could probably be annoying at times .

I think I'd prefer one that is anodized . I like that bright shiny bling look , but the sun glare could probably be annoying at times .
Click to expand...

Thanks!
It has never been a issue for me, but the high polished aircraft grade aluminum takes a little more TLC, and maybe it just blinds the competition

My current JOYPOD-X is anodized black, and I prefer it to the high polished myself.
The funny thing is that I rarely use these works of art, as I am a field shooter by preference.
Give me a specialty pistol, a small field bag, and a good field bi-pod, and I am a pretty happy guy

I love those rifles, i was just talking to my neighbor lastnight that we should do an aluminum specialty pistol with his defiance rukus

Slimfinn said:
I love those rifles, i was just talking to my neighbor last night that we should do an aluminum specialty pistol with his defiance rukus
Click to expand...

COOL!
You must log in or register to reply here.