Got my boat out of the shop after some maintenance performed to it, headed out to the bay and it was nice and cool. Throwing artificials did not land any keepers, but some dinks and several skipjacks. Went to plan B, drove up to a shoreline where I see some jumping bait along the banks in 1 to 3 feet of water, dropped the Power Pole about 150 yards from the bank where wind was stacking baits on that shoreline and chunked out some skipjacks downwind , one hook on a leader and no weights. Bam, pole doubled over and landed a redfish, and we were constantly catching trouts and redfish. Overall we took home 4 reds ( 23 to 27 ) and 4 trouts ( 18 to 23 1/2 ) . Two trouts was 23 and 23 1/2 and two trouts was 29 and the 29's was released according to TPW rules. Trout limits changed from 5 to 3 and lengths are 17 -24. It was a great day, it was cloudy in the morning and the sun came out after a couple of hours. Haven't been catching so many large trouts in a while, it was a great feeling to feel the reds and trouts pull like a train while using light tackle with 20 lb braid. 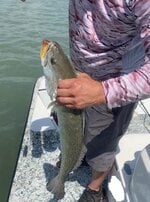 A great day, indeed. You definitely cleaned up.

Mark,
You definitely had a great day!

Sure beat my day.

Good for you.
S

Went trout fishing with a new bamboo fly rod I built 7’ 4 weight. Caught a couple of nice rainbows right after ice out.

Those are beauties--bright and fresh. Good job.
T

Very nice rainbow, I never fished rainbow in the wild, I only remember fishing rainbow trout in a freshwater pool at a mall where they had a Kiddie's fishing tournament when i was a kid.
You must log in or register to reply here.

T
Bite on fire Round 2