There had been some discussion over the winter and spring on the forum concerning Tubb's Final Finish bullets. I had been curious about these and decided to try them on a factory Winchester barrel from the New Haven factory in the 2005-2006 time frame. The rifle is a left-handed M70 chambered in 300 WSM. The bore was very rough and fouled quickly. It even had metal chips pressure welded to surface of bore. It would shoot a good group sometimes but I couldn't duplicate a group from one shooting session to another. It seemed as if a good group could only be shot between about the fifth shot and the 12th shot.

I purchased the 50 bullet set and cleaned the rifle bore until all the copper was removed. The directions recommended a thorough cleaning after each set of 10 bullets. However, I figured that any copper in the bore would not allow the abrasives on the bullet to actually treat the bore. So, I cleaned the bore after every 5 shots. That added a lot of extra work but at least I was assured that each grit of bullet went through a clean bore twice.

I used a new target for each five bullets and during the course of the process, I actually shot a couple of fairly decent groups.

I could tell the process was having an effect. First, I could feel the difference when running patches through the bore. The bore felt smoothly after just the first ten bullets and continued to feel smoother has the process progressed. Secondly, you could see the groups change as the leads to the lands wore.

Here are some before and after photos.

This is an area with a small chip pressure welded before the treatment. 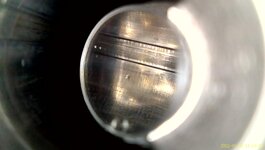 This is the same area after the process. 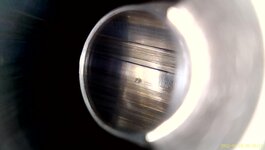 This is another area with a small chip before the process. 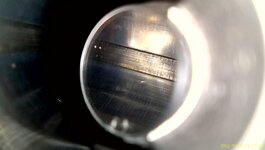 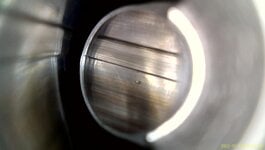 Here is area near the muzzle before the process. 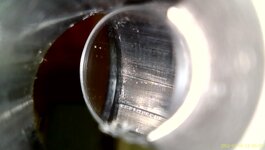 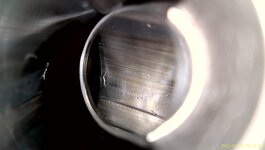 I think the photos speak for themselves.

As the accuracy, I was able to shoot these groups afterward.

As you can see, except for the first fouling shot, it shot pretty good. I would be comfortable taking this hunting.

Overall, I believe the Tubb's Final Finish Bullets helped this barrel. I would use them again in a similar situation.

Thanks for the report Dan.
I had a similar experience with them in a Ruger M77 all weather Stainless Steel rifle I once owned.
Barrel was very rough and fouled heavily till I did a Tubbs fire lap on it, the difference before and after was like night and day.
Scotty pointed me in the right direction to fix that rifle.
If I needed to I would use the Tubb's fire lap bullets in another rifle to fix it.

Dan,
Thank you for the update. The results are impressive.

Quite a few years ago I used the Tubbs Final Finish bullets on a Rem 700 Sendero in 7mm Rem Mag. The Tubbs bullets did indeed reduce fouling in that rifle, and yes, I too could feel it when cleaning the barrel. Accuracy remained about the same (excellent) but the fouling was greatly reduced by their use.

Glad it helped your rifle as well.

Excellent work and valuable intel, Dan. Thank you for posting.

Always great to hear when a fellow sportsman has good results with a product and shares experiences. That is how we all learn.
S

I have saved two P64's from rebarrel jobs with the Tubbs Bullets so far. Both of the rifles were almost exactly as Dan mentioned, rough, fouled like crazy and were just generally bad. By the time I got to the Tubb's bullets I was angry with them and figured, what the heck, I'll fire them and see what happens. Unlike 10, I cleaned after 10 shots and I was not gentle in my shooting of the 10. I kinda wanted them to not work so I could put a nicer barrel on them... Well, both of them turned into two of my best shooting rifles and seem to shoot everything very well now without much fuss. Mine were late model P64's made towards the end so the barrels had chatter marks, tooling marks, etc. After the full 50 rounds they cleaned up amazing and they just shot like crazy.

Also, I noted about .030 growth in the throat after firing the series, but make no mistake, if I have a barrel I am thinking about changing, I'll spend the 30-40 dollars and try the Tubb's as a last resort.

I also used very minimum charges with both guns. Basically, just enough powder to get the bullet down the bore. I think it helps with barrels with tight spots as well, since it uniforms their ride down the bore which sometimes you can feel on a cleaning session.

I wanted to try that on a P64 300 that was rechambered to 300 Wby, but I got in front of myself and did the ultimate lapping job and sent it to JES to become a 375 Improved

Good to know for sure!
P

OK, not the Tubbs, but I used a firelapping kit by Wheeler. I have a Winchester M70 Featherweight in 7x57 Mauser that I really liked the looks of, it felt good in my hands and from a totally cleaned barrel shot sub-MOA groups. The fly in the soup was that by 20 rounds the barrel was so badly fouled even hitting the paper was doubtful, not to mention even weak factory ammo started to show pressure signs.
So, I ordered the Wheeler kit and it came with three grits and two steel bars which you smeared with the appropriate grit on the bullets to be used. Instructions said to use ten bullets with each grit, cleaning the barrel and chamber after each batch of shots. Thought about it for a bit and went with five cast bullets with each grit to see how that would works out. I'd read that they used lead slugs when lapping a barrel so this should work.
After the lapping session and really cleaning the grit out of the barrel and chamber I decided to see if it's done any good ir should I do a do over? I ran a full box of Winchester 145 gr. ammo plus ten rounds of a handload using the 140 gr. Nosler Ballistic Tips. Accuracy was not only good but the largest group was right at one inch. barrel had some copped fouling but it was easily removed in a reasonably short time. Prior to the firelapping, some sessions were as long as 8 hours using Sweet's 7.62 and JB Bore paste after the 7.62. Now I use barnes CR-10 and it seems to work a lot faster than the 7.62.
I'll have to say firelapping can make a difference in the way a rifle barrel shoots. If the barrel isn;t giving the results you want, give lapping a try. If it doesn't help you'd have had to rebarrel anyway.
Paul B.

Good report. A lot of folks are using the process in lieu of a traditional break in process on mass produced barrels. I'm followed up the process with Dyna-Tek bore coat and it's crazy easy to clean out fouling now.

That is an improvement for sure. I keep toying with the idea of trying them in my Marlin , just have too many irons in the fire now.
You must log in or register to reply here.