Bear season opens August 1st. I really want to get another bear this year! Have a tannery up the road a ways that buys the hides & skulls - I don't need any more of those around the house. I want the hunt, the sausage and the bear backstraps can become absolutely terrific chops!


So - have been shooting once a week or so, sometimes twice a week.


And have been hiking or bicycling about three times a week. Mostly on the mountain bike lately. It's an old, American-made Trek. Just a simple "hardtail" model. Got it 15 - 20 years ago and we've had some grand adventures over the years. Lots of good workouts/rides. Interestingly, I've found that I get close to wildlife quite easily when I'm on the mountain bike. It's quiet, and fast. I've startled the heck out of one bear, and have approached coyotes & deer on it as well. 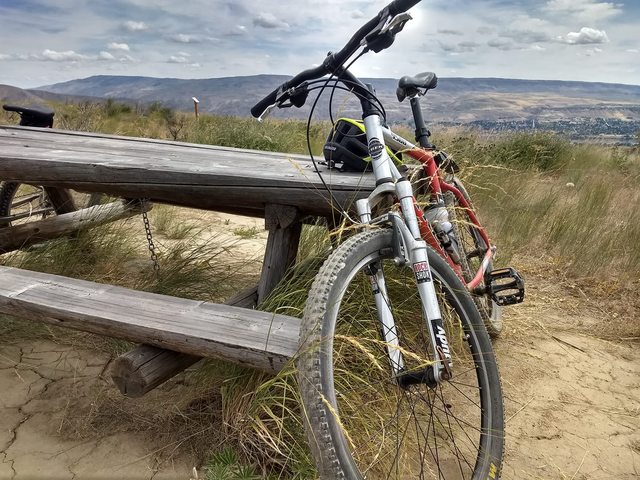 Took the photo Tuesday on a 16 - 17 mile ride above town. The table was built by my youngest son and his buddies about 10 years ago. They built it of logs, here in our garage at home. Then disassembled it, put the parts in my pickup, then hiked the pieces about 1/2 - 3/4 of a mile to a great lookout point above town. Re-assembled it and there it has provided a great rest spot for hikers & mountain bikers. It needs to be sanded, re-stained and to be tightened down again. That sounds like another good workout day to me!

On my rides, I've been carrying my compact 9mm Kahr in a kydex holster from Gunfighter's. They have some excellent non-traditional holsters, particularly for hunters & hikers. Made just up the road a bit from my home. https://gunfightersinc.com/ 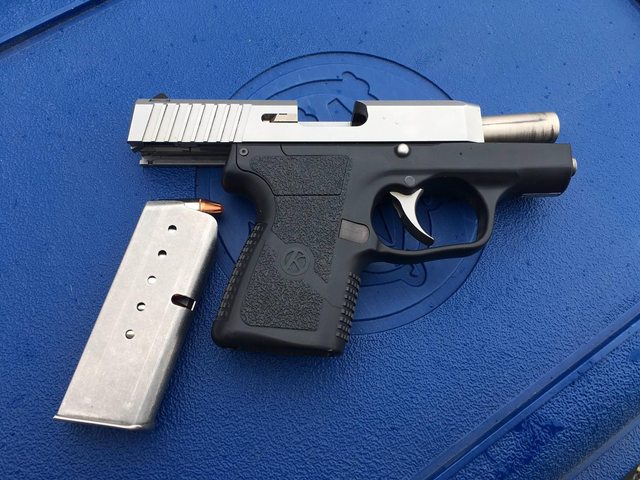 The little Kahr is small enough that I can carry it in a pocket of my cycling jersey if I'm on the road bike! And I figure it's "enough" for most threats. Sometimes on the mountain bike though I'll carry my old 357 mag S&W Model 19. That was usually my choice for on the bicycle, until I got the Kahr. Also used to carry a 45 Colt Officer's model on my rides from time to time. It's nice to have a little something when I'm way out in the boonies or even when I roll through some town or out on the open road. 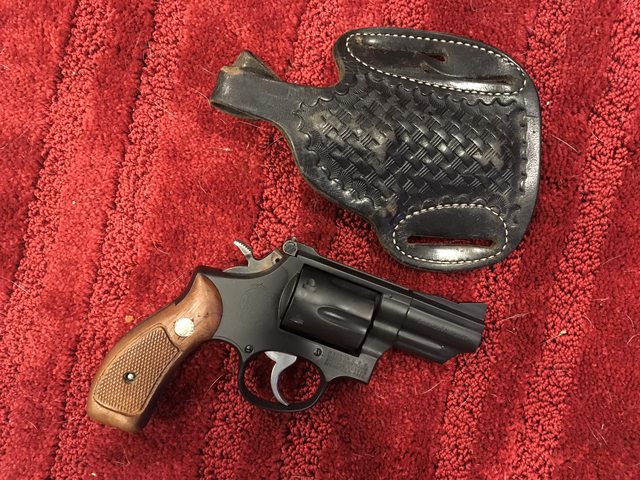 Yesterday we were going to hike up at about 5,000 - 6,000' elevation, the Mission Ridge ski area, and I know there are bears, wolves, cougars & coyotes up there. I had the 44 magnum S&W 629 loaded up with hardcast 250 gr semi-wadcutter handloads. Have been using AA #9 for those loads, which hit about 1250 fps from my 5" revolver. I like that one when I'm in bear country. Photo shows some different, jacketed ammo that I've long since used-up. The 44 is no problem to hike with, but a bit cumbersome for cycling. Still, I have taken it a few times when I knew I'd be someplace where finding a bear was likely. 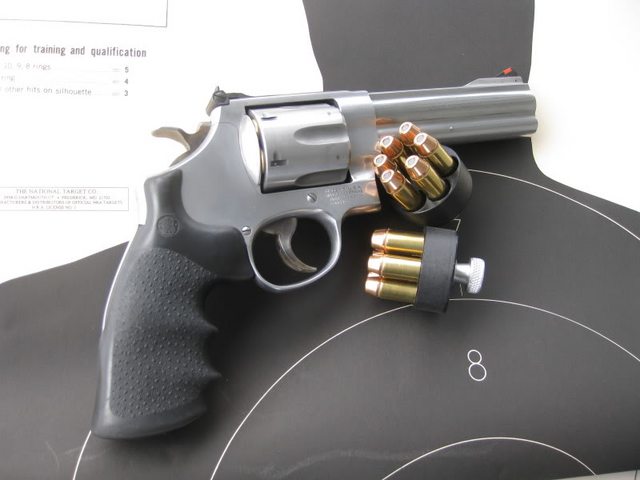 Years ago I attached an inexpensive nylon "Uncle Mike's" holster to the waistband of my hunting pack. It carries either the 45 1911, or the 44 mag S&W securely. If I'm just hiking, I often don't bother with a rifle, hoping that the handgun will be enough. So far, so good.

But.. The weather started rolling in yesterday, so instead we chose to hike a mere 2,400' hill above the north end of town. We still got soaking wet! Doggone rain found us. Made the trails slick & muddy too. But we got off the trail before the thunderstorm hit. Wow - what a storm it was! We hiked about 5 miles yesterday with quite a bit of climbing. Really enjoyed - even in the cool rain. 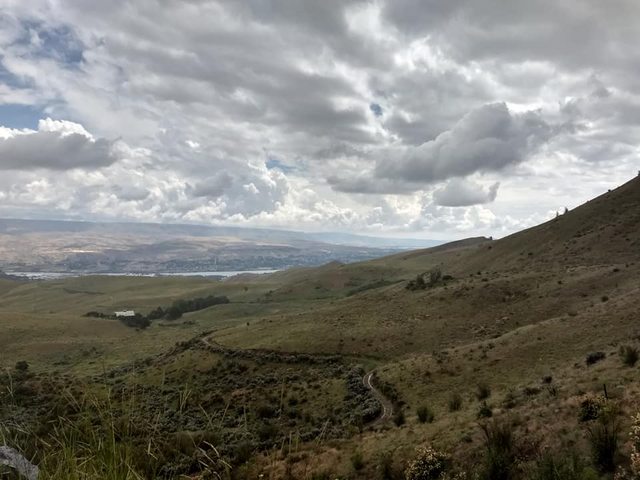 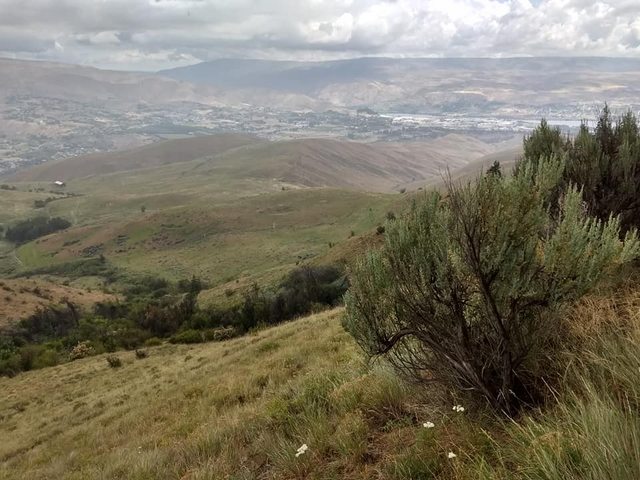 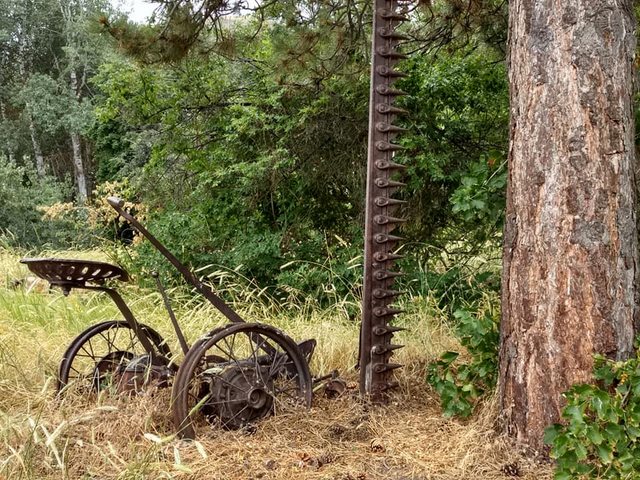 Am figuring with three hikes or rides every week, and shooting once or twice a week. I should be well set for hunting season. I'll start doing some of my hikes and rides in places where I may hunt...

Always like what you did to the Model 19, Guy. I picked up one of the new fangled Ruger LCRx 3 inch in .357 - It's super easy to carry due to the weight, and it's just downright handy. On the down side, it won't eject spent brass, uh, at all. I have to pick them out one at a time.

Good motivation to get outside and just do stuff. Hunting starts much later here, but that just means more time to get ready. Think I'll get some hiking in this weekend, though with all the rain I've been getting, I'm guessing it will be closer to swimming through mud.

Ya, that August 1st start for bear season is early. Mixed blessing. The danged yellow-jackets show up in force to dispute ownership of the carcass.

And I've got to get the meat cooled off quickly!

But... then in September elk season starts, along with the "high buck" hunt for mule deer... I like it.

Well, I made it out for a trail run instead of a hike. I'll take it. September is the start of archery whitetail for me - no elk or bear here, unfortunately.

I think I might have to take a trip your way next year for both.

You have been a lot more active than me Guy. The Wife and I have been hiking wirh a 9.5 mile hike last Saturday, where I saw my first Iowa Timber Rattler. No gun and had to use a stick to get it off the trail.

Sticks work well. A shovel is my favorite rattler removal tool, but none of the rattlers have survived. Weird.

Wore a pair of lightweight Danner desert boots and I like them very much. Also was glad I had a pair of trekking poles, a couple of places got real steep and loose. 12 years ago I crashed my mountain bike hard on this same trail and messed up my right ankle so bad it hasn't ever worked right since. Sigh. Oddly, mountain bikes aren't allowed on these trails anymore. My fault maybe? ooops… Hiking and horses only. 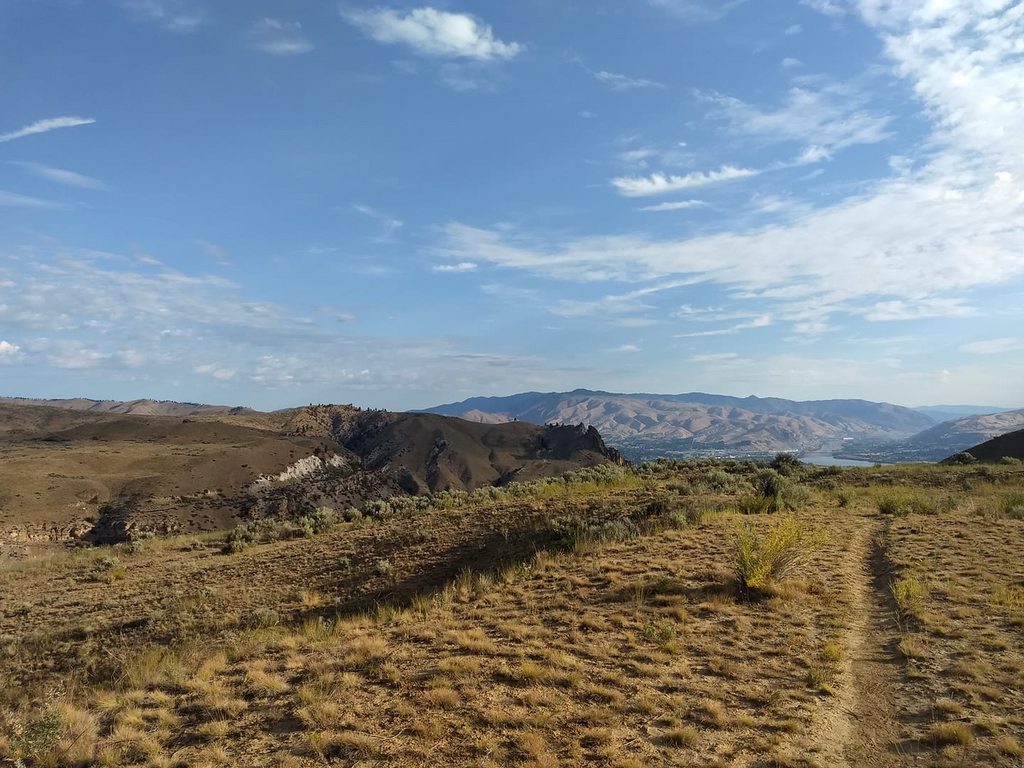 That's pretty guy, beautiful country. I did lots of miles when I was down south this winter , all pretty much on level ground. Since I got back I am changing my routine. I am alternating between weights and hiking. Today was a weight and yoga day and tomorrow on the hill in front of the house. I usually do a couple of hours and depending on how far I want to go, I do about 1,100 feet vertical.. Couple of weeks ago was my first major hike, of the year. Dog Mt, in the Columbia River Gorge. It's just shy of 9 miles total with 2800 foot elevation gain. I wasn't ready for that one, so I ended up skipping a few days for recovery. My first hunt is on Oct. 1st, in Wyoming, at 7,000 feet, not to difficult of country but the elevation there, kicks my butt. I always think that I am good to go, then find that I was wrong. 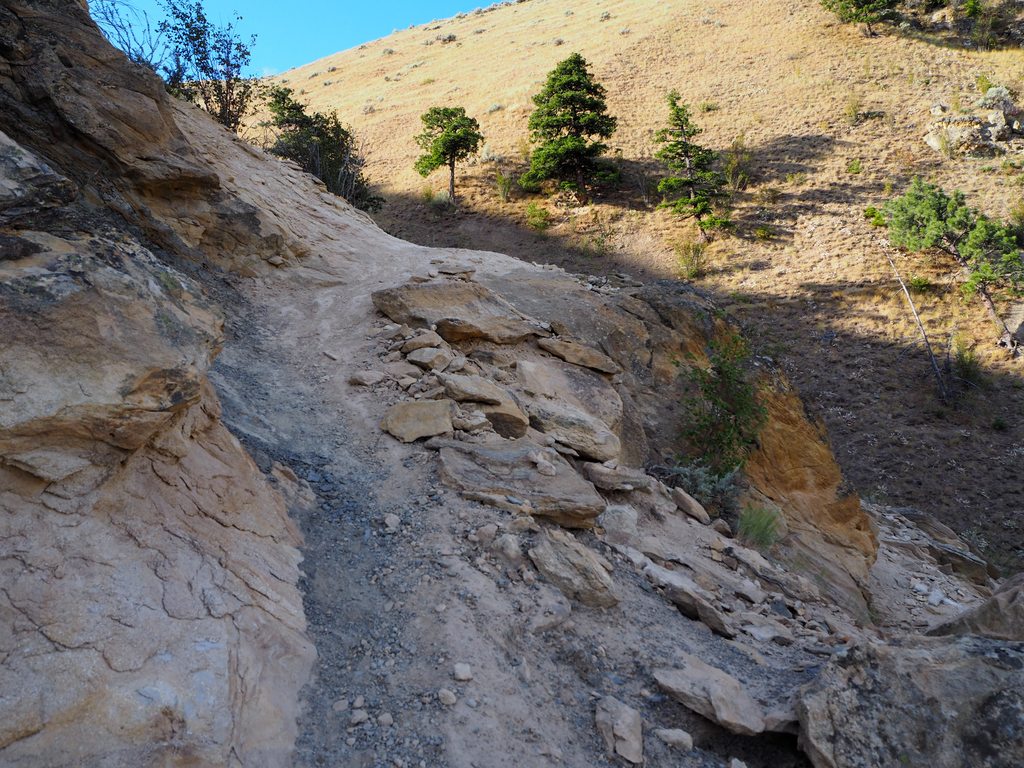 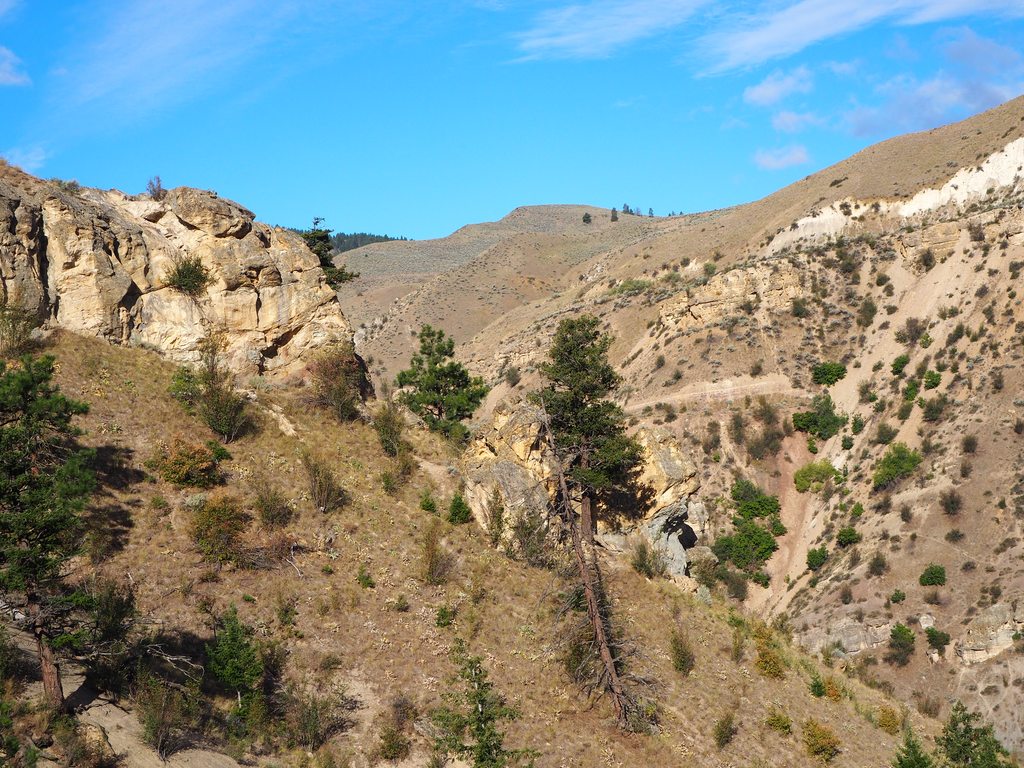 Was a good hike! Got the heart pumping and the legs working! 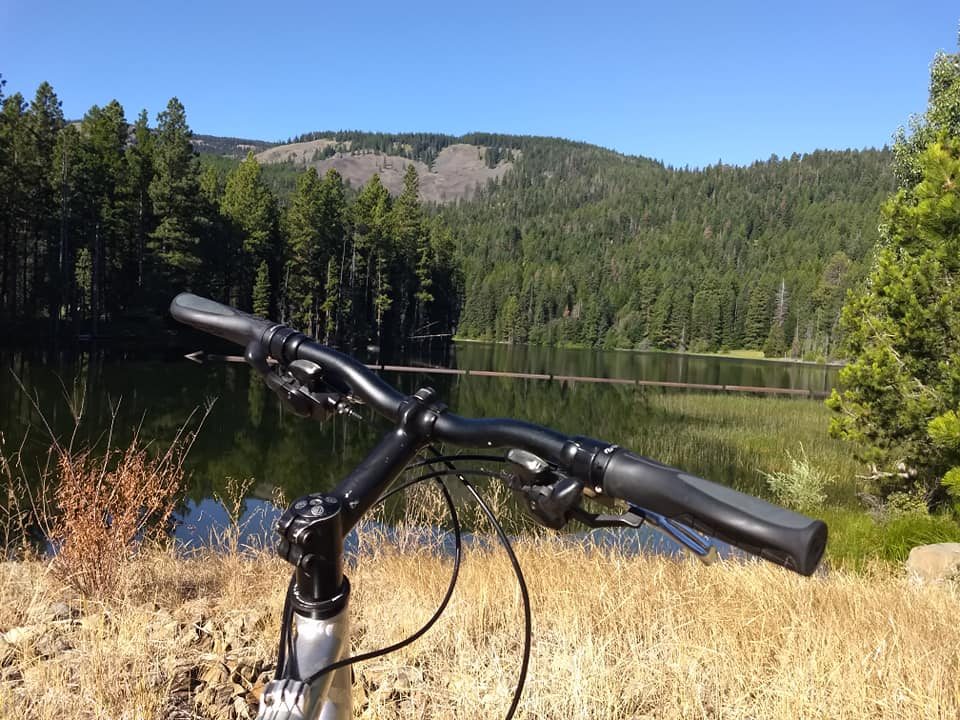 Saw elk tracks, heard some cow elk "talking" a bit. Was hoping to find a bear, but no such luck. Of course I was hanging onto the handlebars for dear life on the descent!

Put on 6.5 miles today in 2 hours and 15 minutes to a waterfall. Went up 48 stories said my I Phone.
Another hike tomorrow,

Hiked 5.5 miles today with just under 1400 ft elevation gain. Not bad for a 2 hour hike up Roan Mountain.

Got out in the kayak too. Not sure how much hunt-prep that does for me, but it's a great workout and I see cool stuff down along the river.

Did pretty good using Zwift and my indoor bike trainer and treadmill in the winter....up through June.

Worked up to running 13.5 miles on a bike path (not much elevation change) and hilly road runs of 7-ish miles. Summer is the hectic time for me at work. Been getting in some miles on the bike and running, but not enough. A few hikes this year, but not a ton. Started lifting again (5x5 program).

Need to get to shooting badly, though. I'm behind the curve there.
You must log in or register to reply here.