Went to a Nashville Gun range today to look at and try a .44 Mag. Thoughts and impressions it was a used gun they said they took in trade. It was the only Smith & Wesson .44 Mag they had and while it had a nice trigger, now the bad news the thing was hard to open the cylinder. I was using PMC 240gr .44 Mag shells. When I turned it in I told the Man at the counter it was hard to open and he tried it and could not open it, he even pushed the cylinder against the counter and it still did not open. Glad I was able to get through 25 rounds. I did like the feel and balance of this gun.
Thoughts and impressions felt nice in my hands & had wood grips, front sight had a red insert and I found it hard to see sharp, yes my eye's are getting worse.
I wanted to shoot one because I have been thinking about buying one and did not know if the recoil would be to stiff for me, I felt it was not to bad at all, but would not want to shoot over 50-100 rounds in a row. I fired these at 7 to 15 yards no I don't shoot handguns a lot anymore and it showed. When I was going to buy one of these last year I ended up with another shotgun. I could always use another one in Iowa where I live as I bird hunt a lot.
I still am not sure if I really need a .44 Mag for a gun in bear country when hiking.
Here is my Target the good the bad and the ugly. Fun Day and I will have to think about this.

That is odd, the cylinder thing, Smiths are known for their quality

My question is were you shooting lead and was the forcing cone beveled and opened up to shoot lead bullets. S&W revolvers are known to have a tight forcing cone and need to be opened up if you plan on shooting a lot of lead threw them. They will shave lead and it will be deposited on the crane causing the cylinder to jam and lock up.

I don't know I just shot Jacketed Soft Points. Only had the gun in my hands for a short time and the only revolver I own is a Ruger Single Six. I have zero experience with double action revolver till today. I never thought to even look truck driver.

I have the 629 with a 6” barrel and it’s a dream to shoot. I love getting it out because when I take newbies to the range, it’s a huge confidence builder when they start doinking bullseyes. I have shot mostly lead, but have had no issues with shaving. Recently I’ve been changing over to jacketed. I do load 44 specials for it as well, and most love it with both specials and mags. Great gun, happy to own it. If I was allowed 1hand gun this might be the one. My Kimber 1911 Target would be I the running as well.
You didn’t mention the grips. I have the rosewood ones. I see a lot with hogue style.
I do carry it in bear/wolf country.

It is possible the extractor rod has started to unscrew causing it to bind against the front of the underlug. I have seen this happen with other revolvers, some to the point they wouldn't open at all. Heavy recoil over time can cause this.

I carry a 4 inch .44 Redhawk as a backup gun when hunting, especially after finding large cat tracks in areas where I frequently hunted.

Not bad shooting. I have a 629 five inch and a four inch 29. The 629 is considerably beefier than the old 29 I have. I also have a 4 inch 57. I shoot almost all hard cast. The first few times I shoot, I polish the bores with JB compound and I have little leading problem. But that is with hard cast. I don't have one but suspect the Ruger Redhawk is a more durable revolver.

rjm158":38dzluak said:
It is possible the extractor rod has started to unscrew causing it to bind against the front of the underlug. I have seen this happen with other revolvers, some to the point they wouldn't open at all. Heavy recoil over time can cause this.
Click to expand...

I suspect that this is the cause for the cylinder not opening. It can happen if a S&W is fired a fair bit and hasn't been maintained. Very easy fix. Screw it back in! :grin: Cleaning it well before screwing it back in/tightening it, and adding a tiny drop of non-hardening Loctite will solve the problem.

Common issue on high-use S&W revolvers. I love 'em and put up with that little problem easily.

Re the power/recoil issue - ya - full power 44 mag loads are pretty rough on the shooter! Your target looks decent. Good thing about the 44 mag is it can readily be loaded to different power levels. Along with a lot of other shooters, I tend to load the 44 into two distinct power levels:

2. Max or near-max level loads with 240 - 300+ grain bullet shoved hard! Whoo-Wee! Some of these are brutal to shoot, but my goodness, they pack a punch. For some reason I don't feel a need to shoot a bunch of these. Hah! Year and a half ago, buddy of mine shot through a bear we'd been tracking with his 44 and a 300+ grain hard-cast bullet. It had been wounded by another hunter. We came upon it in the brush at about 4 yards. I had my 30-06 in hand, but my buddy had his 44 out in a flash and ended that bear very quickly.

I've had several different 44's over the past 30+ years, searching for the "right" one. Believe I found the right one for me ten years ago or so, with a 5" full-underlug S&W 629. It's been accurate and reliable from day one. Not bad to carry either. I have it with me in bear country. 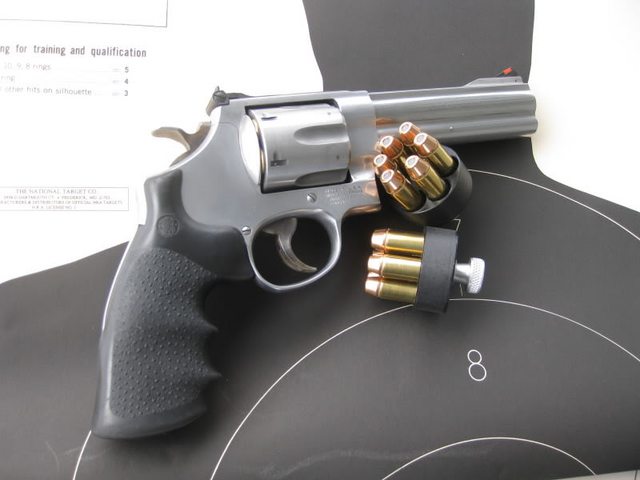 One of our guides carries the 629, it is a handful but fun to shoot.

I concur on the ejector rod opinions. They do back out after a while. Have had it on N-Frames and K-Frames.
V

Have a competent gunsmith check the ejector rod. That’s probably the problem.

Your group isn’t bad for such a heavy recoiling handgun. The more you shoot the tighter it will get just don’t over do it in one session.

Also, dry fire a lot. For every round you fire you should dry fire 25 times.

So did you end up getting a 44 Magnum for bear country?

I myself prefer the 41 Magnum be it for bipedal defense, bears, snakes, or errant Honda Civics. I don’t shoot the 44 well enough one handed for me to even consider carrying it for defense.

"It is possible the extractor rod has started to unscrew causing it to bind against the front of the underlug. I have seen this happen with other revolvers, some to the point they wouldn't open at all. Heavy recoil over time can cause this. "

I agree with this as the possible cause. For the record, the worst S&W for that problem was a K-22. Finally I used some blue Loctite and that fixed the problem.
My 6" 629 is a nice gun but it's one of the earliest models of the 629s and apparently is somewhat fragile so it now sits in semi-retirement. I have several Ruger Super Blackhawks and while they hold up quite well, on really stiff loads the cylinder axle has a tendency to move forward, tying up the gun. A set screw fixes that problem. I also have two Ruger Redhawks, a 5.5" and 7.5". Those dang things need wheels.
I like the .44 magnum and normally shoot Elmer's load, 22.0 gr. 2400 or 24.0 gr. W296 ot H110. Same powder, just different numbers. Frankly, the 2400 load is more comfortable to shoot than the 296. Both loads are decently accurate.
Paul B.
You must log in or register to reply here.

Went looking for a S&W 686 Plus... end up with something els