This was one of the main things I had in my head with this rifle project, and the reason I requested a 16 twist when I sent it out to JES. I had no idea if it would work out, but figured if it didn't I could still use it with regular bullets just fine with that 16 twist.

My idea if it worked, was to try and come up with a subsonic load running somewhere around a 1000 to 1050 or so. They weigh on average right on 70 grains. Basically would be running at the speed of a subsonic 22. But with that 358 ball at 70 grains should hit a TON harder on things like groundhogs at normal 22 ranges.

It has worked out phenonemally. There is zero case prep. Take a fired case just as it is, prime it, charge it, and seat the ball. Because the case is fired it's about the perfect neck size to seat that ball just the way it is.

I made a mark on the center line of the ball, then set my die to seat it to that line. That way the ball is seated on its widest point. 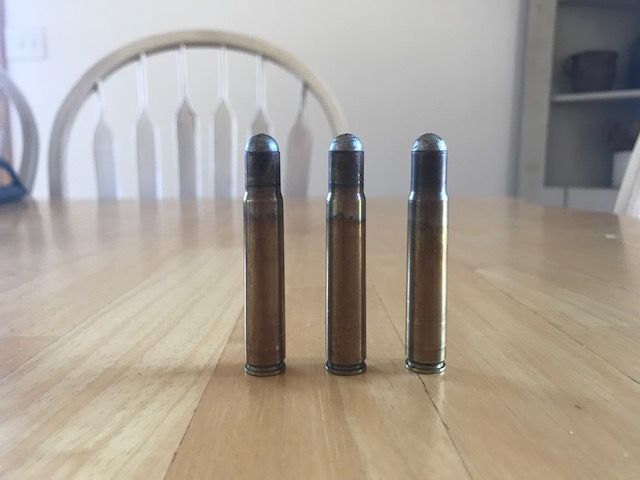 I had no idea where to start with charges. I had Unique powder and came up with 3.5 grains. Was reasonably confident it would not be over pressure in any way. But that first shot is always a butt clencher with the unkown. Never know for sure what odd things are gonna happen inside. On the other side of the coin is it going to be enough to push that tight ball out the bore? I shot it into dirt 20 ft in front of me, and thought based on the delay of hit, and the backed out primer on the case, I was way under pressure. So I started bumping up in charges and testing.

Just shot here at the house at 25 yards and I was tickled with how it was working from the get go. Wont bore you with all the targets but none of them were bad. But 4.7 grains was the ticket. Averaged right around 1060 which is right in the ball park of where I wanted to be. 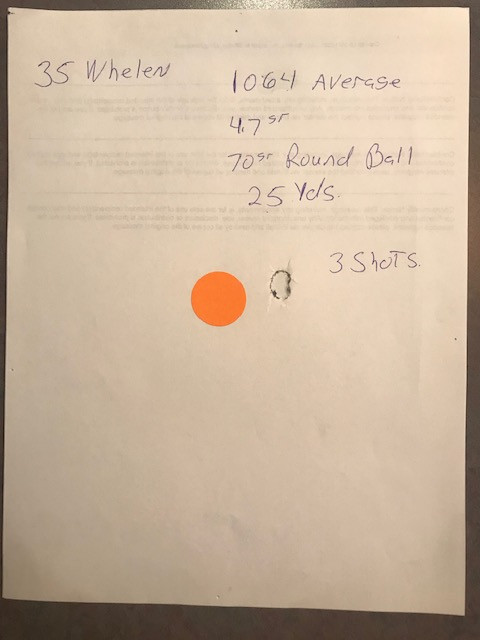 I was 18 shots in by this point, so I cleaned the barrel. Suprisingly it was not lead fouled hardly at all. I suspect both because of the tight fit, and there is very little bearing surface with that round ball. Just the outermost edge on 4 sides would be touching the bore. However it was bad powder fouled........that Unique is horribly dirty at those low pressures. Didn't take long to clean up.

First shot on that clean bore was slightly off, then the next 4 were hammering in the same spot same as before. Shooting in the 2's at 25 yds. Working far better than I'd hoped. This is gonna be a lot of fun and very accurate. I can shoot these cheaper than a 22. 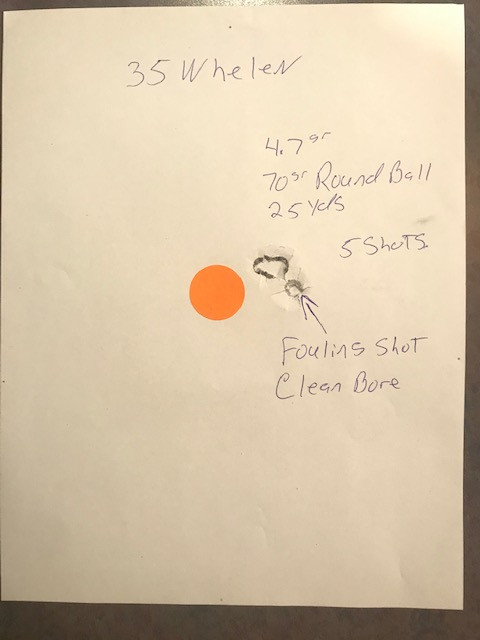 That is a most interesting experiment on your part. JD338 is correct that this will make a very nice load for small game or for pest control. That is great accuracy, even for twenty-five yards.
S

JD, I'd say at this charge weight, pretty sure louder than a 22 but it's hard to say for sure because it's completely different obviously. There's no crack, but a deeper pop. I was shooting it with earplugs so maybe hard to hear exactly how loud it is, but not loud. The 3.5 gr starting charge was quieter. Above 4 grains as the pressures came up it became louder in my opinion. Hard to say what to compare it to, because even small cartridges with minor charges like the 17 hornet crack much louder.
S

I have more testing to do, but not with this charge and powder right now because at this point it's just gonna keep punching holes in the same spot. I have CFE Pistol powder. It is 13 spots slower on the scale than Unique. I'm planning on starting with it about a grain higher and go up from there if need be and get my speeds about the same and see how it shoots.

If it performs similarly on accuracy then I'll compare how it's burning. I'm thinking it's highly possible the CFE will burn much cleaner. If it doesn't work out I'm darn happy with the Unique.

Once I settle on exactly what powder I'll be using going forward, then I'll do some tests with primers. Right now I'm using those $55 per brick magnum primers I bought because I wanted to make sure I got an instant light on those light charges. I'd really like to use those really cheap primers I bought off a neighbor a few weeks back instead. Will have to see how it works out.
3

That is pretty cool. What kind of rifle was this?
S

DrMike said:
That is a most interesting experiment on your part. JD338 is correct that this will make a very nice load for small game or for pest control. That is great accuracy, even for twenty-five yards.
Click to expand...

Yes sir Dr Mike. I was really happy with the accuracy. I was hoping to be able to stay around 3/4" or so at 25 which would be sufficient for 1.5-2" at 50 yds to shoot groundhogs and such. It worked out way better than I expected. I basically have the modern version of those old accurate Kentucky squirrel rifles except I'm a couple caliber sizes bigger. Ha.

Once I'm all set on everything I'll have to figure out the ballistics for the different yardages. I figure around 75 yds will be it's limit. I'll probably end up sighting it in at 50 yds.
S

3 Meter Para Bellum said:
That is pretty cool. What kind of rifle was this?
Click to expand...

A sporterized 03 Springfield. It was an 06 obviously and the rifling was shot out in the original barrel so I sent it out to JES for a rebore to make it a 35 Whelen. It didn't shoot horribly as it was and at times shot some good groups, but was on the teetering edge all the time to maintane accuracy. Little things affected accuracy. 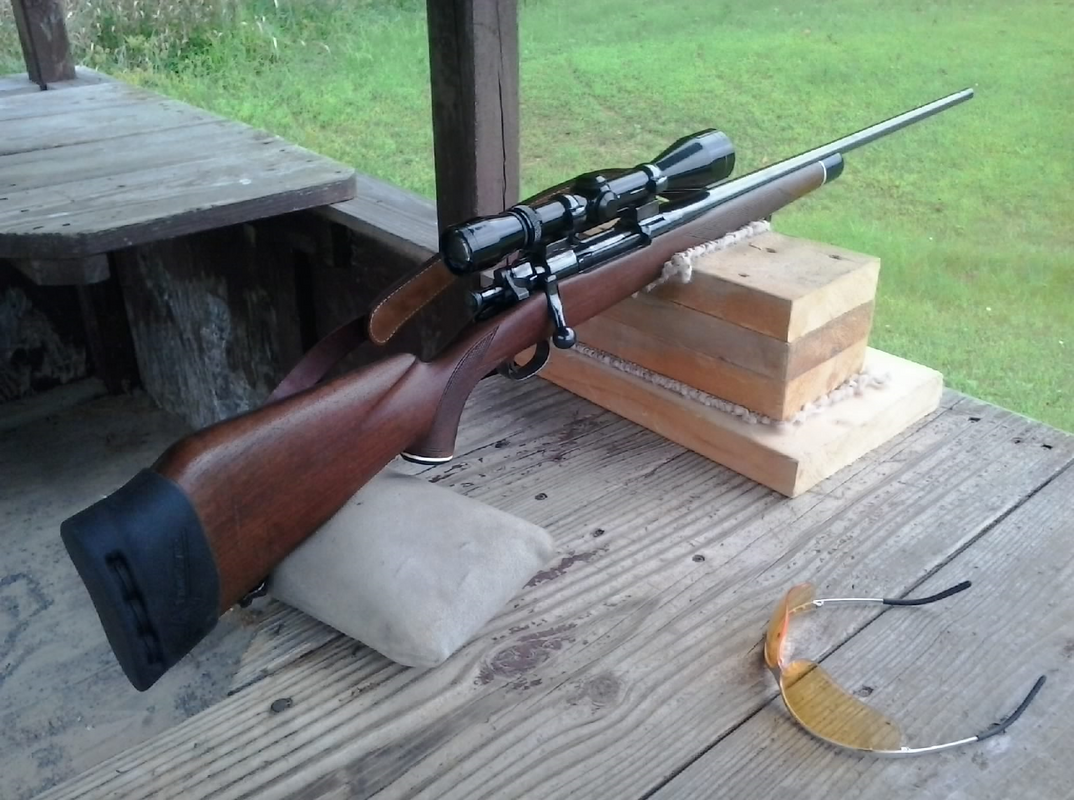 That was interesting. Now powder coat lead cast balls and you will eliminate any chance of lead fouling should you have the desire to speed things up.
W

Neat project Shade. That would be fun to squirrel hunt with. Might give Bullseye a try if you have any. Won't take much powder, little cleaner than Unique and stay in the same velocity range. Another plus is your breaking in the new rebore. Dan.
S

wvbuckbuster said:
Neat project Shade. That would be fun to squirrel hunt with. Might give Bullseye a try if you have any. Won't take much powder, little cleaner than Unique and stay in the same velocity range. Another plus is your breaking in the new rebore. Dan.
Click to expand...

That's what I'm thinking Dan,........that I'd try going with a faster powder and see if it would clean up any with these light loads. I don't have anything faster, but buddies would have stuff like Red Dot, if not Bullseye.

I did try the slower CFE Pistol and like the Unique it stayed very well behaved throughout the different powder charges. It just likes this set up apparently. Started at 5.3 grains and worked up to 5.7 which was in the 1030's average. At 25 yds it shot in the 3's with the lower charges, and the 5.7 charge shot in the 4's. In the end I seen no advantage over Unique. Didn't shoot quite as tight and was every bit as dirty at those low pressures in my opinion.
S

P.S. Just to follow up on JD's question above. I shot this a couple times with no ear plugs. It most definitely is louder than a 22, but still a long ways off from what I'd call loud. Could get away with shooting it without ear plugs, but like a 22 I wouldn't with repeated firings on a bench.

Time to get that barrel cut down to 16” and threaded. I bet those would be very quiet thru a suppressor
S

Could you load with TrailBoss? Ive never worked with it but i know it makes very reduced loads.

Cool old rifle (again) Shade. Really like those "old school" examples of the gun makers art. And a new life for it, cause its in a cool caliber,. CL

Thanks fella's. Still experimenting with what works, or what works for me in this rifle. The round balls I've used from the start in testing are wheel weight lead with some tin added. Not hard lead, but hard enough. Also had some made up with soft lead that I left sit until now. Tested the soft lead and it shot plenty good enough, but after about 8-10 shots the groups opened up and I checked it and there was some heavy patches of lead at some places at the start of the rifling, and a couple spots in the bore. Got that removed so that I'm ready for more testing with other things. Will probably stay away from the soft lead.

Shot to real close the same point of impact. If I needed heavy expansion for some reason, I can use them, but not ideal.
S

Thebear_78 said:
Time to get that barrel cut down to 16” and threaded. I bet those would be very quiet thru a suppressor
Click to expand...

Bear I'm starting not to like you very much. You keep making me think about things that can only cost me money. I'm still contemplating a Swarovski scope to put on that Sauer ever since you put the thought in my head. As of yet I can't make myself spend that kind of money on a scope, but I'll probably break down eventually.

Almost all my scopes are European made. I must say that money spent on a Swarovski, a Zeiss, a Leica, a Kahles, etc. is money well-spent as they never let me down at the critical moment when failure would have been disastrous.

It’s only money, you’ll make more
You must log in or register to reply here.