Slimfinn said:
Could you load with TrailBoss? Ive never worked with it but i know it makes very reduced loads.
Click to expand...

Two of the members of the range I'm a member use Trail Boss a lot. Dan.
M

ShadeTree said:
Bear I'm starting not to like you very much. You keep making me think about things that can only cost me money. I'm still contemplating a Swarovski scope to put on that Sauer ever since you put the thought in my head. As of yet I can't make myself spend that kind of money on a scope, but I'll probably break down eventually.
Click to expand...

You can't take money to your grave, and I have one of the starter Swarovski Z3 on my CZ550 full stock it makes a great pair in low light the problem with upgrading a scope is you will then want better on your rifles it becomes an addiction and it is why I will never look through a Swarovski Z5 or higher.

Thanks, I'm pretty happy with how it's working. Just messing around, but I enjoy experimenting and figuring things out, and yeah I know I'm different.

On the practical side, bullets will be unlimited, and I can get roughly 1400 rounds from a lb of powder. Cheap trigger time is never a bad thing, and accuracy is fun and addicting. Could bring home a lot of game with a setup like this if need be.
I

Very cool ST! I remember seeing a YouTube video years ago where a fella' loaded "swaged" round balls..

I'm glad you went with a 35 Whelen! I'm finally starting load development on mine. I even just got a membership at a range with some 1,000yd steel.

When it comes to almost everything you get what you pay for. With scopes it isn't just the clarity of the glass, it is the internals that will fail you. I've taken apart several scopes that have failed and it is unbelievable how cheaply some of these are made.
S

grry10 said:
When it comes to almost everything you get what you pay for. With scopes it isn't just the clarity of the glass, it is the internals that will fail you. I've taken apart several scopes that have failed and it is unbelievable how cheaply some of these are made.
Click to expand...

I wont disagree with you, it's the internals that will get you. That said I've been using what some would call cheap scopes all my life. I don't use what I feel is cheaply made with no regard to any quality, but certainly a long ways off from expensive.

I've never had a scope failure on what I use for hunting. A couple of them I've had since my teen years and are so worn you can't read any of the numbers on the zoom function. I've never owned a magnum, so there is that to consider.

Some cheap scopes are just that. Cheap in every way. Others are not. I wont go over all my rifles and what they have on them, but not a lot of money in scopes on rifles that continue to produce reliable results.

On the flip side I worked up loads for a Savage Axis combo rifle last yr that came with a Weaver scope on it if I remember correctly. JUNK. Horrible clarity and embarrasing parallax. They should take money off the rifle if you're buying the combo.

Worked loads up for a 30-06 with a Leupold on it last yr. Gave the targets and the rifle back to the man and left it the way it was shooting.......about 2" to the left. Told him he could adjust it as I didn't know if it would shoot exactly to the same POI with him.

Talked to him later, he adjusted over 8 clicks, shot it, hit about the same place on target as I was. Moved it 8 clicks again, hit the same spot. He kept clicking and could not get it to move. Somewhere during the time he last shot it, or when I shot it, the windage broke in the internals.

Failure can happen and it isn't always based on the money you spent. High end scopes are high quality, and they should be for the money. But there's a lot of middle of the road scopes that will give a lifetime of reliable service without failure. My opinion.
S

So I got some more results to post if it interest any of you in following along. Seen some trends of intrest when looking back over my targets, and had one surprise.

Something that is apparent when looking over the targets, the Unique acts more like a lot of ball powders in this set up. Not terrific, then when you hit it, it's on. A lot of my targets have 2 together, 1 out. As you get closer the 1 out gets closer, then next charge it's on. Go past that, same result, 2 together, 1 out. Nothing bad with the mag primers, but 1 out until you hit it.

The CFE acted more like a stick powder..........a wider range of very similar good performance, then as you get away from ideal, it starts opening up. The dissapointing part of the CFE is that I think I dislike it's burning characteristics even more than Unique. Left flakes of unburned powder at the case mouth, and in the bore. Just as dirty as Unique, but shot well across multiple charges. 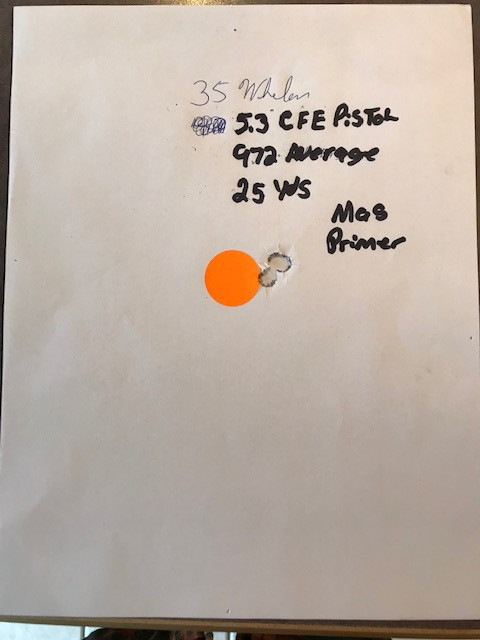 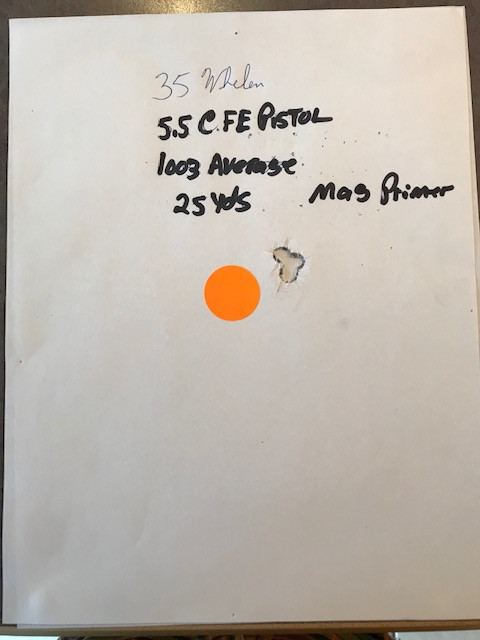 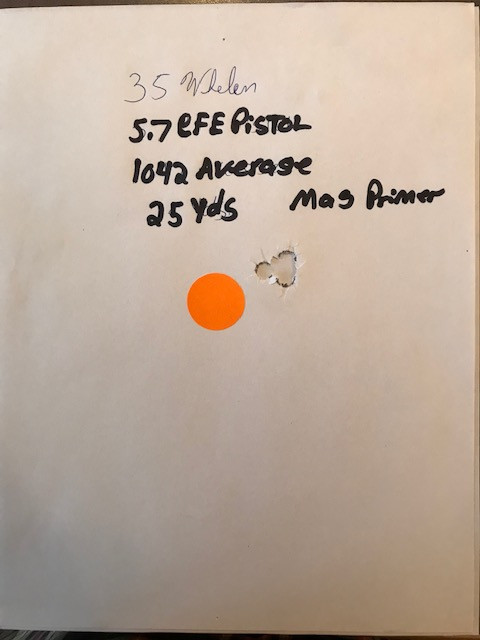 The next thing that was apparent, was that across the board it shot better with Mag primers than with Standard primers. The surprise was that the standard primers produced higher velocity in the neighborhood of 60-80 FPS with the same charge.

I backed speeds off with the standard primers to match the mag primer speeds, and it didn't shoot that great. So I went the other way. Got the same 2 together 1 out I was getting with Unique before, and when I hit 1240 it shot the best........not as good as the 4.7 with mag, but not bad. 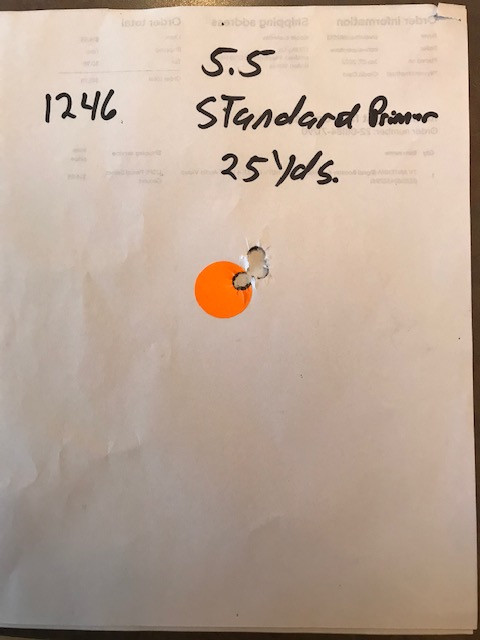 This morning I tried 5.5 once again. I'm now on shots 33-34 since last barrel clean. Is likely getting pretty bad powder fouled. Was way colder this morning and my velocity averaged 30fps less. Running a pretty tight spread though for this light charge. Standard deviation of just 9 on this test.

So now I have a good sub-sonic load with mag primers, and a regular 22 speed load with standard. The crack level is definitely up with the faster load. You can't cheat physics. I'd like to do some tests with a faster powder yet. 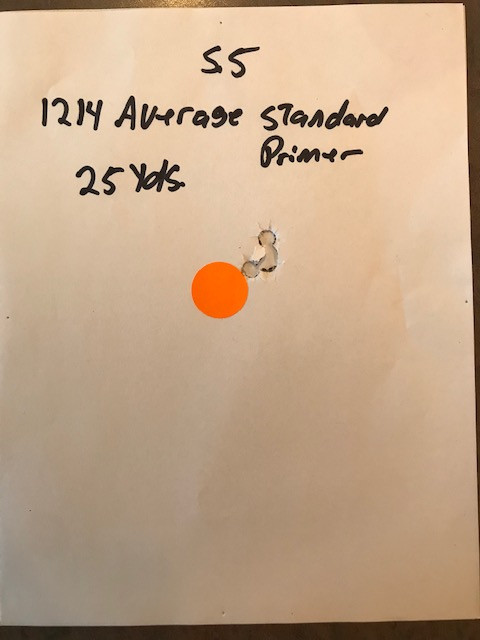 This is really good stuff. From time to time, I read articles about something like: "if you could only have one gun..." This sort of exercise makes me realize exactly how much flexibility handloading gives us. Not that I ever want to wake up and find myself having only one gun (even after a boating trip), but I might just decide to try out the "only one gun" thing for a year - Hunting, pest control, etc. It'd mean a lot more loading, but I also think it would help me to know my gun a lot better.
S

KinleyWater said:
This is really good stuff. From time to time, I read articles about something like: "if you could only have one gun..." This sort of exercise makes me realize exactly how much flexibility handloading gives us. Not that I ever want to wake up and find myself having only one gun (even after a boating trip), but I might just decide to try out the "only one gun" thing for a year - Hunting, pest control, etc. It'd mean a lot more loading, but I also think it would help me to know my gun a lot better.
Click to expand...

Yeah. Not a bad deal to have a rifle that can be an effective small game getter as well as taking care of pests, and turn around and be able to use it for deer, bear, elk, and moose. Pretty neat really.
S

Something else I discovered that maybe some of you can put in your memory bank for later.

When primers were readily available, I've always used CCI 200 standard primers exclusively. Not necessarily because I thought they were better, but I felt they were good and that way whenever I came up with an optimal load for a rifle, I didn't have to worry about it being with X primers in this rifle and load, and a different X primer in another rifle and load.

I prep all cases with a primer pocket uniformer and use a RCBS hand primer, so I know what CCI's consistently feel like when being seated in a case.

With this experiment I was using Federal 215 mag primers. They without question seat noticeably harder than the CCI's on cases with the same primer pocket prep. And not just some, like maybe some are slightly oversized, but all.

So if you have cases that are in fine shape yet otherwise, but are showing loose primer pockets with other primers, you might try Federal primers if you have them. Might get you 2-3 more loadings on brass before you have to toss them.

DrMike said:
Almost all my scopes are European made. I must say that money spent on a Swarovski, a Zeiss, a Leica, a Kahles, etc. is money well-spent as they never let me down at the critical moment when failure would have been disastrous.
Click to expand...

I switched to Zeiss when life blessings made it doable. I wouldn't go back if the blessings continue. I do have an eye on a Swaro...
You must log in or register to reply here.