What does "accurate rifle" mean to you?

I generally accept 1/2 MOA at 100 as accurate from the bench, But there’s more for me than just group size off a shooting bench, the rifle needs to fit me so that off hand shooting will also be “accurate”. With Off hand shooting, with no rest or support whatsoever, I’m personally not capable of much better than about 4 MOA at 100 with a properly fitting rifle and scope. An I’ll fitting setup, is worse than that.
P

I've been reading old gun magazines lately and read one by Charles Askins on rifle accuracy for hunting. He felt 2.5" was more than adequate for big game. Magazine was GUNS dated June 1988. Also of interest in that copy was the introduction of Ruger's P85 9MM semi-automatic. Almost sorry I ever gave the one I had away to my daughter but that's the one she wanted. FWIW, today is her birthday.
Paul B.

bdbrown66 said:
For me personally, I would consider any production rifle that I can consistently shoot down into the .5-1 MOA range to be an accurate rifle. Acceptable (but not great) accuracy would be in the 1-1.5 MOA range. Above that, I probably won't keep it. I bought a used 7-08 a while back. No matter what I tried, I couldn't get that rifle to group much less than 2 MOA, so it went down the road again.
Click to expand...

I'm right there with you Brian.

If I've got a rifle that is consistently under MOA, I think of it as accurate.

1 - 2 MOA is average for my hunting rifles, try to avoid that 2 MOA stuff. I try to get my hunting rifles down around 1 MOA, but if they shoot consistently at 1.5 MOA or so, I'll hunt with them for sure.

Some just aren't that good, or I don't shoot them well, or something... They can be fun and interesting as well, depending on my expectations.

Sometimes I think back about the more accurate rifles I've sold, with regret... But they're gone now.

Gavin at Ultimate Reloader built what he calls a 223 Trainer bolt action rifle that is the most accurate rifle I've ever shot. Now I've only done three-shot groups with it so far, but three different shooters, including me, have shot 100 yard groups in the .1's, from a bipod! I even made one group that measured a scant .053" - now that thing is accurate! I really ought to shoot some 5-shot groups with it and out at longer ranges too.

However, it's not a rifle I'd care to lug around the hills. It would be terrific for shooting prairie dogs, sage rats or other burrowing animals from a benchrest.

Then there's my 30-30 Glenfield. I've not done much "group shooting" with it at all, just enough to get it sighted-in. Yet it's a hoot to ring the 200 and even 300 yard gongs with it, often from standing! I think it's a 1.5 MOA rifle with the best loads I've made for it.

My SWAT sniper rifle is a 308 with a Krieger barrel that's aging nicely. It's always been capable of sub MOA groups, many times closer to half MOA. Nice consistent cold-bore hits too. Even though it's a bit on the heavy side, I have hunted with it and will do so again. It's not too heavy to hike with and the accuracy is real nice to have. Not picky about bullets either. 168 or 155 grain match bullets do fine, as do 125 - 180 grain hunting bullets. Just a pleasure to own & shoot.

Ah well, just where my mind went after getting started thinking about rifles & loads & accuracy.

If it gets the first shot pretty consistently near the point of aim (POA), then I am pretty happy with that. While I want to group as well (who doesn't) I don't go chasing tight groups. Close enough is good enough except for my 223 where I have a strong interest in groups as it's what I use for headshooting roos and will fire more rounds and as such need greater consistency with a warmer barrel. My reasons for only really being interested in first shot placement are as follows:
When doing load development, I often can make a number of different "batches" where the first shot is close to POA but the groups can range in size. Not necessarily in a significant way at all, but they could vary 0.5 MOA or slightly larger. In such cases I go with the load with the most powder. I don't have chronograph so working on rough science that more powder the faster the projectile, though I know that this is not 100% true but without an ability to test speed it's the best I have.

What Guy said above about his SWAT rifle, the fact that it isn't picky about ammo, that is something that is an important aspect of accuracy to me. I am more likely to keep a slightly less accurate rifle that is not particular, than I am a slightly more accurate rifle that only shoots well with one or two loads.

To Me its MOA or better in a Bolt Action Rifle.
P

I'm right there with ya
B

My son has one, and it's a pretty good shooter.
P

bdbrown66 said:
My son has one, and it's a pretty good shooter.
Click to expand... 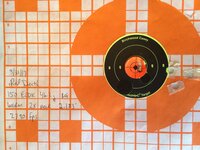 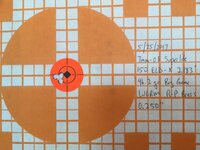 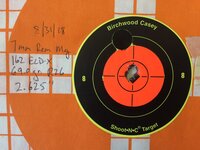 Acceptable is 0.8 MOA to 1.3 MOA.
Anything over that in a bolt or semi auto platform is unacceptable to me for hunting.

Acceptable is 0.8 MOA to 1.3 MOA.
Anything over that in a bolt or semi auto platform is unacceptable to me for hunting.

BD Brown was dead on when he "said back in the day an accurate rifle shot 1.5 to 2.0 MOA. For years I lived near a bunch of gun buffs and we loaded together and shot local matches together. All spearheaded by my cousin an exmarine who took to heart "once a rifleman, always a rifleman."
Then I changed jobs and moved away. I have literally found no one close by who shares my standards for shooting and there are no local matches to attend. But I still shoot. Anytime I want to because I now own the land. So up until a few years ago I was content shooting my 1.0 groups. But I was beginning to wonder about it. I was a metrologist, one who develops methods of measurement, and something kept nagging at me about my process of preparing my cases. So I started experimenting. My ground rules were the rifle was limited to a 10X scope, because a couple of mine wore Leupold 3.5X10X40 scopes. And the rifle itself must be a standard off the shelf factory rifle.
My results were gratifying. My old M700 Remington in 7mm magnum has shot a couple of groups .188 and under. Benched on sandbags.
My Browning Abolt II in .300 Winchester magnum shoots .188 to .250" with regularity. My Tikka .308 hasn't been run through the whole process yet but when sighting in most shots are all touching. Using the same rifles this is considerably more accurate than they used to be. I account that to improvements in my hand loading process. To me an accurate rifle shoots 1/2" and under at 100 yards, "good enough is 1.5 to 2.0".
Last edited: Sep 8, 2022

Here is a thread from June that describes how I came to my own definition of accuracy. https://forum.nosler.com/threads/an-expectation-of-accuracy-and-where-i-landed.43387/#post-476732

In short, my first shot from a cold bore needs to be within 1" of POA at 200 yards. (Or .5MOA of POA I suppose.) I couldn't have gotten to this level without reading hundreds of posts on this site.

TNBillyEarl said:
Here is a thread from June that describes how I came to my own definition of accuracy. https://forum.nosler.com/threads/an-expectation-of-accuracy-and-where-i-landed.43387/#post-476732

In short, my first shot from a cold bore needs to be within 1" of POA at 200 yards. (Or .5MOA of POA I suppose.) I couldn't have gotten to this level without reading hundreds of posts on this site.

There is a handful, if not more here that is more than willing to help enable other in precision reloading and or precision shooting at short or LR. then the fun really begins, when you start shooting from field positions and stretching the distance.
Cold bore shots at maximum hunting ranges, really tells you where you are in terms of adjusting for the conditions, but of course, you need to know where your cold bore shot hits in great conditions first.
S

Accurate rifle? I've owned this Ruger 77 tang safety since 1967 or 68. I was 13 earned the money to buy it bucking 80 lb bales. Killed grizz, moose, Caribou, bighorn, Antelope, black bear, elk; Rocky Mountain and Roosevelt, black tail white tail and mule deer, coyotes.
Buddy asked to borrow it for a cow hunt with his wife this year. I had exactly six rounds of 180 Barnes TSX loaded, haven't zeroed for that load in years.
Five shots through the same hole. Couple clicks windage, a click for elevation, fired the last round. I pulled it a touch left.

An accurate rifle is one you know you shoot well and don’t have to fuss around with. One MOA is fine for a hunting rifle, 1/2 MOA certainly builds confidence. My 275 Rigby does just that. Swapped out scopes and took it to the range today also. Had five rounds loaded of my preferred 140 grain Nosler Ballistic tip. I did have some additional rounds but they have not proven to be as accurate. Turned out my bore sighting was pretty close. Made a minor correction and fired another round, one more correction and fired three more.
An accurate rifle is more than being able to lay them in there off the bench. IT’s also knowing your rifle and how you shoot it. It’s knowing that one round fired for effect is sufficient to adjust too. In the case of the ruger #1 it’s knowing that every thing on it is round, it’s a horrible bench rest rifle. Trusting your technique makes an accurate rifle.

T
does your barrel length determine